Scoliosis is defined as a lateral curvature of the spine, the presence of which is abnormal. We know that as early as 500 BC Hippocrates was writing about it and its name is derived from the Greek word for curvature. It can be disfiguring because when the spine bends to the side, the vertebrae become twisted and pull the ribs round with them, which sometimes form a “bulge” on the back and cause the shoulder blade to stick out.

The causes of scoliosis are many and although we well understand the consequences, the origins of this condition remain complex and obscure. There are two main types of scoliosis:

Overall, about two per cent of the population have scoliosis. There is a definite genetic connection; around 25% of those with a scoliosis have a direct relative with a curvature. 80% of adolescent idiopathic scoliosis arises in girls and 80% of these girls have their rib prominence on the right side. 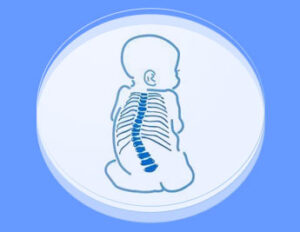 Scoliosis often starts at about the age of eight but may go unnoticed, especially as it rarely causes problems in the early years. Parents may see an uneven waist or shoulders, particularly prominent shoulder blades, elevated hips or leaning to one side.

The spine can bend towards either side of the body at any place in a C-shape; in the chest area (thoracic scoliosis); in the lower part of the back (lumbar scoliosis); or above and below these areas (thoracolumbar scoliosis). It can even bend twice causing an S-shaped curve. When the curve has this double curvature it is often not noticeable and the person can appear quite straight because the two curves counteract each other. If the curve is low down in the spine, the ribs will not be affected but one hip may be higher than the other.

As scoliosis progresses it may cause back, limb or abdominal pain and may start to restrict breathing as lung cavity is distorted.

Diagnosis should be made after a thorough medical examination by a scoliosis specialist. The child’s back should be examined when they’re bent forward as sometimes bad posture can be incorrectly diagnosed as scoliosis. An x-ray of the spine will confirm the diagnosis.

By taking measurements from an x-ray it is possible to tell the severity of the curvature. From here the course of treatment will be decided. If the curvature is mild it will simply be monitored every six to twelve months dependent on the patient.

Treatment consists of observation, bracing and surgery. If the curvature isn’t severe or the child has nearly finished growing, they may simply be checked on a regular basis. Most will get better without treatment.

However, a brace is sometimes necessary to prevent scoliosis getting worse. The Boston Brace is commonly used in the UK, particularly in curves that become evident before puberty as these are more likely to increase during the adolescent growth spurt than curves that start during adolescence. Braces are normally worn 23.5 hours a day after a preliminary period. They are generally only removed for exercises and swimming. Towards the end of the treatment they may be worn at night only. 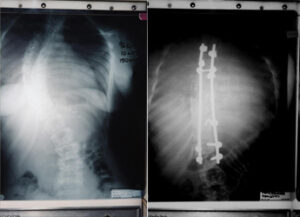 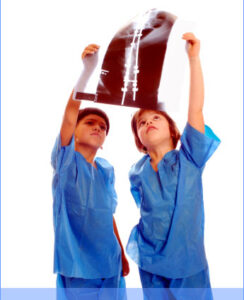 A special programme of exercises is recommended by some as a non-invasive way to improve posture and function. However, these involve a very intensive and expensive course of training and there is no convincing scientific evidence to prove that there are any long lasting effects or that the exercises prevent the need for surgery.

In severe cases, especially if the child is still growing, surgery may be necessary to straighten the spine. About one child in every thousand will need hospital treatment usually for major corrective surgery with the insertion of a permanent metal rod.

There is no reliable evidence that other techniques such as osteopathy, chiropractic, physiotherapy, reflexology, acupuncture or neurostimulation can make any difference to a potentially increasing spinal curvature. However, these techniques can be useful if backache or pain is present.

The Scoliosis Association (UK) was founded in 1981. It is the only independent support group for scoliosis in the UK. The Association provides a helpline, leaflets and has a website. As a member of the organisation you receive a twice yearly newsletter and access to the database so that you can be put in contact with others who have already been through similar experiences. www.sauk.org.uk

The Scoliosis in Infants campaign is a joint venture between SAUK and ARISE (Association of Research into Idiopathic Scoliosis – Registered Charity No. 298604). It is sponsored by the London Law Society.

If you have three or more living family members with idiopathic scoliosis, and wish to help us with this study, please contact: